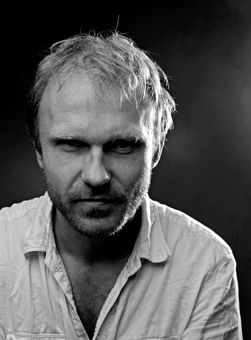 Exhibition: Today, whole communities in the U.S. has turned into ghost towns. The unemployment rate is soaring many places and many well paid jobs have been replaced by work in the so-called service sector, work that only pay minimum wages. 46 million Americans lives below the porverty line. This has created huge social challenges. The Blue Collar America, the working middle class, has become much poorer, the few rich ones has become extremly rich. For the last three years, I have together with writer Roy F. Andersen been travelling through the former US Rust Belt. From Chicago to Detroit, to Youngstown and Beckley, Williamspot and ending up in New York. The area where the car industry created the middle class, where the worlds leading steel was produced and where the black gold, the coal, made families able to build their own homes.

Biography: Espen Rasmussen (b. 1976) is based at Nesodden, close to Oslo, Norway, where he lives with his partner and three kids. He works as a photo editor in VG Helg — the weekend magazine of the biggest daily Norwegian newspaper VG. At the same time he is constantly working on his own projects, focuses on subjects such as humanitarian issues and the challenges related to climate change. He is represented by Panos Pictures. Rasmussen has won numerous awards for his work, including two World Press Photo awards, second and third place as Photographer of the Year in the U.S. Picture of the Year international (POYi) as well as several other awards. In Norway he has won a total of 41 awards in the Norwegian Picture of the Year, including Photographer of the Year in 2015 and 2016 and Picture of the Year in 2004 and 2016. Rasmussen is frequently giving presentations at photo festivals and for a wide range of other audiences. For the last six years, he has been one of three editors/mentors in Norwegian Journal of Photography (NJP). His work has appeared in magazines such as Time, Newsweek, National Geographic, Der Spiegel and the Economist and newspapers such as The New York Times, The Sunday Telegraph and The Guardian.